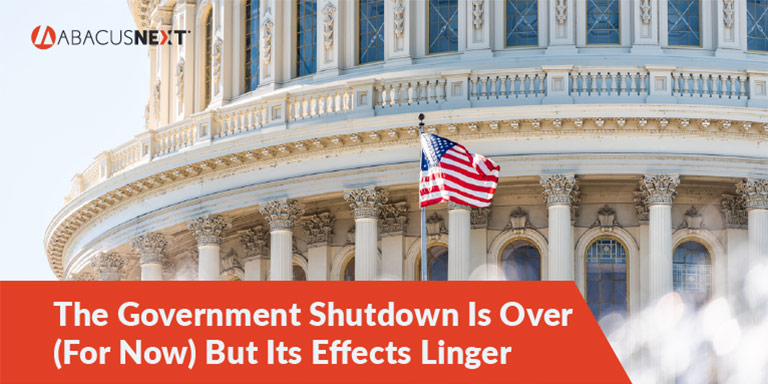 The Government Shutdown Is Over (For Now) But Its Effects Linger

The United States government is open again after the longest shutdown in history. Thirty-five days after funding lapsed, which put one in four federal employees on furlough, President Trump a temporary funding bill that will keep the government open for the next twenty-one days. With no longer term resolution in sight – let alone a comeback strategy – government employees and the rest of the country are strapping in for a bumpy ride.

Government shutdowns touches a plethora of industries from coast to coast. Law and accounting firms are no exception. The most affected firms are large practices that deal with any of the nine executive agencies that have been crippled by the shutdown. Since a plan of attack for backlogged work is unclear, it’s hard to predict how the shutdown will affect implicated firms. Jeffrey Lowe, leader of recruiting for law firm practice groups at Major Lindsey & Africa’s, offered some insight: “If the shutdown goes on long enough, some law firms could see a dip in billable hours for the quarter.” According to an article by The American Lawyer, that’s because “several activities, including deals and court appearances, will be pushed back.”

Shutdowns impact many government functions, in some cases slightly hindering operations and in others ceasing all activity completely. Let’s look at a few in depth, starting with taxes. Taxpayers are still expected and able to file tax returns. According to CBS, “the IRS has recalled about 46,000 employees furloughed by the government shutdown … to help process returns and issue refunds.” Additionally, the IRS toll-free phone applications, online services, and other tools are operational. However, Co-Director of the Tax Policy Center Eric Toder warned that, “…those seeking assistance from a real person will struggle.” Because Taxpayer Assistance Centers are closed due to the shutdown and there’s limited staff answering the phones, taxpayers “with more complicated situations” or “who need extra help” may have difficulty filing. Don’t count on paper correspondence either; the IRS is replying to a “very limited degree” while the government is shutdown. Visit IRS.gov for more information.

Next, let’s examine how shutdowns affect the bankruptcy process. According to the Administrative Office of the U.S. Courts for the Federal Judiciary, the bankruptcy courts, case management systems, and electronic filing systems remained open during the shutdown. A blog by the Wright Firm notes, “If the government shuts down, it is unlikely to cause a significant delay for most bankruptcy cases.” Chapter 7 and Chapter 13 Trustees (key players in the bankruptcy process) have little financial reliance on the federal government.In the case of bankruptcy courts, the Chapter 7 process should not be affected, except for delays in discharge orders. Luckily, delayed bankruptcy cases are protected by the automatic stay and are “unlikely to cause any harm to debtors.”

Immigration cases are a different story. Chances are good that immigration courts and judges will be impacted by furloughs. Detained cases will continue to be processed since they’re considered essential, while non-detained cases might not.

Even in this state of uncertainty, some facts hold true. The shutdown has caused a collective slowdown of federal operations at best, and those that have remained open have to handle the challenge of staffing. With government funding only secured for 21 days through February 15th, courts, lawyers, and Americans have little choice but to wait out the storm and hope for a long-term solution.