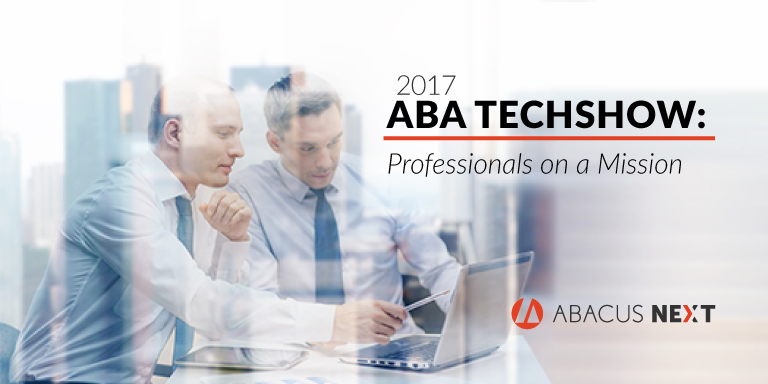 ABA TECHSHOW 2017: Professionals on a Mission

Having just ended a whirlwind few days at the 31st annual ABA TECHSHOW, I’m a little tired and a lot inspired. Tired because there was a lot to see and do; inspired because of the energy and motivation that the show always provides.

I had the chance to talk with Adriana Linares who chaired this year’s show and who pointed the show in a new direction. In his opening remarks, John Mitchell, chair of the ABA Law Practice Division described Adriana as “an Energizer Bunny” for her intensity, passion and nonstop work (especially when she’s inspired by a cause.) And make no mistake, she was inspired as the TECHSHOW chair.

But even the Bunny wears down sometimes. When I finally managed to corner her for a minute on the last day of the show, even she admitted that she didn’t think she could talk about the TECHSHOW anymore. She did, however, offer the insight that “lawyers that come to this Conference are on a mission”. In reflecting on this statement, I think that’s what makes TECHSHOW unique. You don’t see, for example, legal professionals at TECHSHOW who are obviously attending sessions just to mark down CLE time while writing and responding to emails or drafting documents. Most people, like me, have specific things they want to truly learn about, products they want to see and hear more about and people they want to talk to. According to Adriana, “they are here to learn and network and we want to be sure we do both”

I experienced this myself when Bob Krocak and John Kauffman, who were exhibitors, sponsors, and Lunch ‘n Learn presenters invited me for a drink. Bob and John represent a company called IVDesk. Now I must admit, I approached the invite with some hesitation and a little dread, expecting a sales pitch for a product I knew little about. Instead, it was only because Bob and John peppered me with questions about what I thought lawyers needed and would like to see from a technological standpoint. I have since learned from the internet that IVDesk is a cloud based solutions company; the fact that Bob and John wanted to learn more than sell though is emblematic of so many TECHSHOW attendees—they were, like Adrianna said, on a mission.

Certainly, the show had a lot of substance and changes to offer. One of the most talked about changes was Adrianna’s decision to bring in new and, it seemed, more women and diverse speakers. Adrianna decided early on to exclude any one who had spoken consecutively for the five preceding years. Good call; few seminars I attend have the same speakers for five years in a row on any topic.

And as I mentioned in a previous post, TECHSHOW offered a startup competition that was fun and enlightening. It was won by Ping, by the way, an automated timekeeping app; Doxly, an app that streamlines the M&A process was runner up.

For the first time, TECHSHOW also offered an academic track. The track was headed up by Michael Robak, associate director of the law library and director of information technology at the University of Missouri-Kansas City School of Law. The track brought together law school faculty, students, legal technologists, and others to talk about how law schools could do better in improving students’ chance for success after the graduate by giving them better technology related skills and learning skills. I chatted with Michael on the opening night of the show and he was excited about the prospects, particularly since so few law schools presently offer any such courses and curriculum.

And as always, hard issues were addressed. Last year it was the eroding nature of privacy and Cindy Cohn, Executive Director of Electronic Frontier Foundation provided an outstanding—and chilling—keynote address.

This year it was the role and place of alternative legal services providers (ALSP) in the legal marketplace in the spotlight. Mark Britton of Avvo, Charley Moore of Rocket Lawyer and John Suh of LegalZoom were all on a Panel and were interviewed Judy Perry Martinez, who chaired the ABA’s Commission on the Future of Legal Services, and Paula Frederick, general counsel for the State Bar of Georgia.

And while there was much speculation beforehand what kind of reception these gentlemen would receive (and yes there were no women on the panel), there really was no reaction other than polite applause. The biggest round of applause occurred when the past Law Practice Division Chair, Tom Bolt, stood up and made an impassioned plea for the panelists to support continued government funding of the Legal Services Corporation.

Knowing many of the folks in the audience and their prior opinions on ALSPs, I can tell you it’s not out of shyness that no one stood up to offer their opinions. Perhaps this reflects that ALSPs’ are now considered mainstream and are more widely accepted.

Interestingly, more debate was generated about the use of bots and apps to perform certain legal function. One such discussion was generated by a Panel discussion entitled “The Startups Are Coming”. The Panel was composed of a who’s who of legal technology writers and start up representatives and included Bob Ambrogi, the godfather of legal technology writing, Andrew Arruda of Ross Intelligence, an AI program that’s turning lots of heads, and Nicole Bradick, a well-respected legal technology developer and co-owner of CuroLegal. These bots and apps mentioned by the Panelists (like the Panelists, I am purposefully not using the term robo lawyers) let people do things without lawyers or with reduced input from lawyers. The app DoNotPay, for example, uses artificial intelligence and a bot to help people deal with parking tickets. Perhaps more controversially, that same app also offers free legal aid to refugees seeking asylum in the U. S and Canada.

The use of apps and bots ignite debates whether it is a good thing to provide legal advice essential unsupervised by any human lawyer. A bot can’t deal with nuanced issues and facts the way a real live lawyer can and, the argument goes, their use risks advising a course of action that could not only be wrong but catastrophic. On the other hand, such apps and bots offer legal services to those who would likely otherwise get no legal advice at all. Most of the time, at least in the parking ticket context, the service is sufficient. But as the use of AI and bots increase, the issue whether it’s better to serve more people who would otherwise not use a lawyer less adequately or to serve a better more expensive product that comes with increased friction will be vigorously debated. As you might guess, the Panel also generated lots of discussion about ethical issues and questions of how to ensure that where bots and other artificial intelligence is used, there is an avenue out and access to lawyers if the problem is too complex or the answer being provided is clearly wrong.

So just like every year, and perhaps even more so given the new look, TECHSHOW inspires and delight, always raising cutting edge issues, while providing valuable networking and substantive skills opportunities and sessions. As Adriana put it, as TECHSHOW Chair she “I just wanted to connect lawyers to technology to enhance and develop their practices…I hope I have succeeded”

I think she succeeded marvelously!

About Steve: Stephen is a member of Frost Brown Todd LLC and is a member of the Firm’s class action and privacy groups. He frequently defends participants in consumer class action litigation and mass tort litigation. Stephen is a national litigator and advisor who is experienced in developing solutions to complex litigation and corporate problems. His mission is to find simple, successful, and elegant solutions to the problems posed by complex and substantial civil litigation, primarily in the mass tort and consumer class actions, and privacy and data breach arenas. Stephen is also a member of fbtTECH, the firm’s technology industry group that focuses on the future and anticipating the ways in which technology will impact the legal system and the issues facing clients. He writes frequently on the impact of technology on the practice of law and is Vice-Chair of the American Bar AssociationLaw Technology Resource Centerand an Editor ofLaw Practice Today Webzine.You can find him on LinkedIn.

AI and Law Firms Are a Great Combination

Law firms are known for being steeped in tradition and slow to adapt when it comes to modernizing. But while they still have all those great book-lined shelves, more and more legal practices are recognizing the value in the most modern innovation of them all—artificial intelligence, known to its friends as “AI.”  The idea of...